For over 25 years, the Mukhtar laboratory devoted large efforts aimed at developing novel mechanism-based dietary agents for prevention and treatment of skin diseases and cancer. In August of 2021 the laboratory has closed, Dr. Hasan Mukhtar is now Emeritus Professor.

Currently the laboratory is working on novel dietary agents present in pigmented fruits and vegetables for the treatment of psoriasis. The Mukhtar laboratory has expertise in molecular and cellular biology, biomarker assessment and considerable experience with the use of various animal tumor bioassays of induced and transgenic models.

The focus of Mukhtar laboratory in this area is to establish the utility of naturally occurring dietary substances in prevention and treatment of skin and other cancers. For these studies cellular and molecular approaches in cell culture systems and intervention studies in transgenic mouse models are performed. Chemopreventive efficacies of many dietary substances and molecular targets of their effects are examined. The long term goal is to establish a mechanistic basis for developing novel approaches for prevention of skin and other cancers.

Prevention of photocarcinogenesis and photoaging

Exposure of the skin to sun’s ultraviolet (UV) radiation, particularly its UV-B component (280–320 nm), results in erythema, edema, hyperplasia, hyperpigmentation, sunburn cells, immunosuppression, photoaging, and skin cancer. Amongst these various adverse effects, skin cancer and photoaging are of great concern. More recent changes in lifestyle have led to a significant increase in the amount of UV-B radiation people receive leading to a surge in the incidence of skin cancer and photoaging. As these trends are likely to continue in the foreseeable future, the adverse effect of UV-B has become a major human health concern. Therefore, development of novel strategies to reduce the occurrence of skin cancer and delay the process of photoaging are highly desirable goals. One approach to reduce their occurrence is through photochemoprevention, which is defined as the use of agents capable of ameliorating the adverse effects of UV-B on the skin. Photochemoprevention via use of botanical antioxidants, present in the common diet of humans, has gained considerable attention as photochemopreventive agents for human use. This laboratory has identified several agents that can ameliorate UV induced damages and many such agents have also found a place in skin care products. 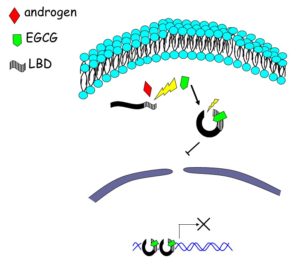 Model depicting the effect of green tea constituent EGCG on androgen receptor (AR) mediated signaling. (See image, left) EGCG competes with natural AR agonist DHT to physically interact with the expressed AR protein. Once bound, it decreases the interdomain interaction of AR leading to a decrease in AR protein expression and hence, a decrease in AR transactivation functions. This results in decreased expression of AR target genes and, thus might negatively influence the growth of prostate cancer cells in vitro and in vivo. FASEB J. 2011 Apr;25(4):1198-207. 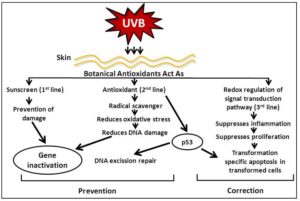 Three modes of action of botanical antioxidants. (See image, right) Accumulating laboratory data indicate that many botanical agents, with antioxidant properties exert anti-inflammatory, cancer-preventive and anti-photoaging effects in the skin. This suggests the possibility that specific botanicals might be used for the prevention and treatment of a variety of human skin disorders. The use of skin care products supplemented with several effective agents working through different pathways in conjunction with the use of sunscreens may be an effective approach for reducing UV-B-generated ROS-mediated photoaging and skin cancer in humans. Because UV-B radiation plays an important role in cutaneous damage, agent(s) that can protect against UV-B-radiation could be ideal photochemoprotective agent(s) for photoaging and skin cancer. Exp Dermatol;15(9):678-84, 2006.

Apoptosis, a form of programmed cell death, plays a fundamental role in the maintenance of tissues and organ systems by providing a controlled cell deletion to balanced cell proliferation. 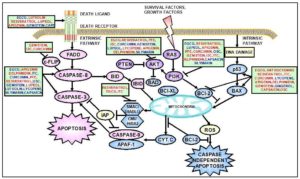 Induction of apoptosis by dietary chemopreventive agents. The extrinsic pathway is initiated by ligation of transmembrane death receptors (CD95, TNF receptor and TRAIL receptor) to activate membrane-proximal (activator) caspase-8 via the adaptor molecule FADD. This in turn cleaves and activates effector caspase-3. Dietary agents block the death receptor and also target the caspases blocking the caspase cascade. This pathway can be regulated by c-FLIP, which inhibits upstream activator caspases and IAPs, that affects both activator and effector caspases. The intrinsic pathway requires disruption of the mitochondrial membrane and the release of mitochondrial proteins into the cytoplasm. Stress signals elicited by the dietary chemopreventive compounds regulate the proapoptotic proteins and antiapoptotic proteins, leading to the release of cytochrome c from the mitochondrial inner membrane. Cytochrome c forms an apoptosome with Apaf-1 and caspase-9, thereby initiating the apoptotic caspase cascade, whereas Smac/DIABLO and high-temperature requirement protein-A2 bind to and antagonize IAPs. The activated caspases catalyze the dissolution of intracellular structure that leads to apoptotic cell death. The Bcl-2 family proteins regulate apoptosis as they form complexes that enter the mitochondrial membrane, regulating the release of cytochrome c and other proteins. The activation of the caspase cascade occurs by the TNF family receptor and it also causes activation of Bid that activates mitochondria-mediated apoptosis. Bax is activated and releases cytochrome c and other mitochondrial proteins. Dietary agents can also block growth factor-mediated antiapoptotic signals through the direct inhibition of the binding of growth factors to the receptor or inhibition of the downstream phosphatidylinositol 3-kinase (PI3K)-Akt pathway. Blue color of dietary chemopreventive agents denotes that both the in vivo and in vitro effects have been demonstrated and red color denotes that only in vitro effects have been demonstrated. Carcinogenesis;28(2):233-9, 2007.

The last decade has witnessed an exponential increase in the number of studies investigating how different components of the diet interact at the molecular and cellular level to determine the fate of a cell. It is now apparent that many dietary chemopreventive agents with promise for human consumption can also preferentially inhibit the growth of tumor cells by targeting one or more signaling intermediates leading to induction of apoptosis. The Mukhtar laboratory has pioneered in the identification of several compounds from dietary sources as inducers of apoptosis in cancer cells. Emerging data from the laboratory suggest that some of these dietary agents especially those which humans could be persuaded to consume may be utilized for the prevention and management of cancer.

Chemoprevention, especially through the use of naturally occurring phytochemicals capable of impeding the process of carcinogenesis at one or more steps, is an ideal approach for cancer management. 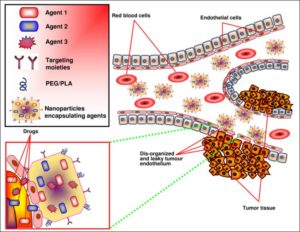 Despite accomplished outcomes in preclinical settings, its applicability to humans has met with limited success for many reasons including inefficient systemic delivery and bioavailability of promising chemopreventive agents. The Mukhtar laboratory recently introduced a novel concept of “nanochemoprevention” that utilizes nanotechnology for enhancing the outcome of chemoprevention (Cancer Res 69, 1712–1716, 2009). To establish the usefulness of nanochemoprevention in cancer management, the efficacy of a well identified chemopreventive agent epigallocatechin-3-gallate (EGCG) encapsulated in polylactic acid (PLA) and polyethylene glycol (PEG) nanoparticles (hereafter referred to as nano-EGCG) in preclinical settings was studied. Nano-EGCG was found to retain its biological effectiveness, with over 10-fold dose advantage compared to nonencapsulated EGCG for exerting its cell growth inhibition, proapoptotic, and angiogenic inhibitory effects. Nano-EGCG was also observed to be effective in inhibiting tumor cell growth in athymic nude mice, with over 10-fold dose advantage compared to nonencapsulated EGCG. The rate of degradation of nonencapsulated EGCG was rapid, with a complete degradation within 4 h, whereas nano-EGCG had a significantly longer half-life. These studies provide a foundation for the use of nanoparticle-mediated delivery of natural products to enhance the bioavailability of active agents for their enhanced effective and chemopreventive potential. In doing this, it is hoped that perceived toxicity concerns associated with prolonged use of agents could also be minimized. One disadvantage of using PLAPEG nanoparticles is its unstable nature in acidic environment; and therefore, it is not recommended for oral consumption. Also, oral consumption is the most desirable and acceptable form of delivery of chemopreventive agents. The Mukhtar laboratory is currently working to overcome this obstacle and is working on ways to develop nanoparticles encapsulating phytochemicals that are suitable for oral consumption.

Another focus of our research is identification of molecular targets that could be used as biomarkers for cancer progression, identifying the stage of the disease, as novel therapeutic or chemopreventive targets, or as a prognostic marker for drug development. Our laboratory over the course has identified several such molecules that are over-expressed during the progression of cancer. 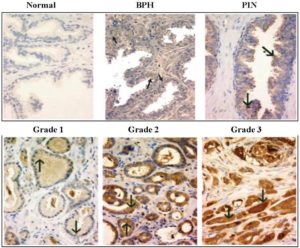 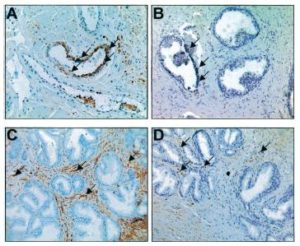 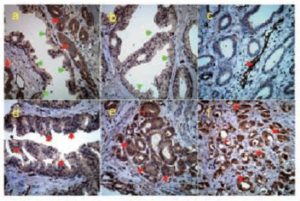 Psoriasis is a chronic inflammatory skin disease involving keratinocyte hyperproliferation and aberrant terminal differentiation affecting approximately 2-3% of the population in the United States. The pathogenesis of psoriasis is complex and incompletely understood; however, it is appreciated that hyperproliferation and aberrant differentiation of epidermal keratinocytes and inflammation leading to disrupted barrier characterized by an abnormal stratum corneum is a prominent feature of the disease. Caspase-14 is involved in terminal differentiation and is essential for accelerated cornification in response to barrier disruption and for the formation of normal corneocytes. Emerging data from other laboratories and our studies suggest that caspase-14 expression is substantially down-regulated in human psoriatic lesions.

Anti-inflammatory agents which possess the ability to inhibit hyperproliferation and induce differentiation could be useful for the treatment of psoriasis. Developing such an agent, especially a natural product, would be a welcome addition to the armamentarium for treating psoriasis. Delphinidin, a major anthocyanidin abundantly present in pigmented fruits and vegetables, possesses anti-inflammatory and anti-proliferative activities.

Preliminary observation from the Mukhtar laboratory suggest that delphinidin treatment induced procaspase-14 protein and mRNA expression in normal human epidermal keratinocytes (NHEK). Delphinidin also induced the processing of caspase-14 into catalytically active subunits p10 and p20. Furthermore, delphinidin treatment to NHEK increased the protein expression of AP-1subunits and NF-kB subunits p50 and RelB. Importantly, delphinidin under identical treatment conditions did not result in induction of apoptosis. This remarkable distinction forms the basis of current ongoing research which is designed to investigate the effect of delphinidin on keratinocyte differentiation and hyperproliferation both in in vitro human reconstituted skin model and in preclinical in vivo settings.

The hypothesis that this laboratory is testing is:

Delphinidin will induce differentiation and accelerate cornification that will in turn reduce the severity of psoriasiform lesions by inducing the expression of caspase-14 and suppression of cell proliferation without inducing apoptosis.

If these assumptions are experimentally validated in the ongoing research then delphinidin could have promise for the treatment of psoriasis and for other hyperproliferative skin disorders.