The long-term goal of Ahmad laboratory is to be able to make an impact on the quality of human life through cutting-edge biomedical research. To achieve this goal, we want to define the critical molecular and biochemical events in the process of cancer development that will help us identify the targets for disease management. Using this knowledge, we want to be able to develop new approaches and strategies, which could ultimately be translated from the bench to the bedside, for the prevention and/or treatment of cancer.

Thus, our research is focused on two broad and complimentary research areas:

A major focus of Ahmad laboratory is to study the molecular mechanisms/signal transduction pathways involved in the development and progression of cancer. We are studying the role and functional significance of mitotic regulators in cancer development and progression. The regulators of mitosis include the genes that encode several kinases, including the polo-like kinase (Plk) family of serine/threonine kinases. In another project, we are also trying to understand the role of nicotinamide adenine dinucleotide, NAD+-dependent deacetylases, Sirtuin family proteins in the development and/or progression of cancer.

The second major focus of Ahmad laboratory is to define the cancer chemopreventive/therapeutic potential of a variety of agents viz. resveratrol (a phytoalexin antioxidant found in grapes, nuts, berries and red wine), melatonin (the chief secretory product of the pineal gland and a known antioxidant), vitamin E (the major antioxidant in biomembranes) and selenium (an essential micronutrient for humans).

A few examples of some recent work from Ahmad laboratory are provided below.

Role of Plk1 in Cancer 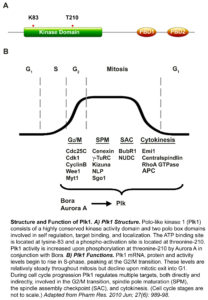 Polo-like kinase (Plk) family of serine/threonine kinase play Key regulator for the mitotic progression in mammalian cells is the family known as polo-like kinases (Plks). Plk1 is the most well studied member of this family (see figure). Currently, we are studying the role and functional significance of Plk1 in melanoma development and progression. More specifically, in one of our ongoing project under this program, we are testing the hypothesis that Plk1 plays a critical role in melanoma via modulation of Notch signaling.

This study suggested that Plk1 may have an important role in melanoma survival and/or progression. As a follow-up of this study, we are currently assessing if Plk1 plays a critical role in Notch signaling and melanoma development and survival through regulatory phosphorylation of Numb, an antagonist of NICD (Notch intracellular domain). The outcome of this work may lead to development of novel strategies towards the management of melanoma.

Role of SIRT1 in Cancer

We are exploring role of SIRT proteins in cancer. SIRTs are nicotinamide adenine dinucleotide (NAD(+))-dependent deacetylases that belong to the Silent information regulator 2 (Sir2) family of proteins. Some members of this family, including SIRT1, have been implicated in the genetic control of aging and longevity. We are currently evaluating the role and functional significance of SIRT proteins in age-related cancers such as prostate cancer (PCa) and melanoma.

In a recent study (J Biol Chem, 284:3823-32, 2009), we have shown that Sirt1 was overexpressed in PCa cells and human PCa tissues compared to normal prostate cells and the adjacent normal prostate tissue, respectively. Further, we have also shown that SIRT1 inhibition via nicotinamide and sirtinol as well as via short hairpin RNA (shRNA)-mediated RNA interference resulted in FoxO1-mediated inhibition of the growth and viability of human PCa cells. 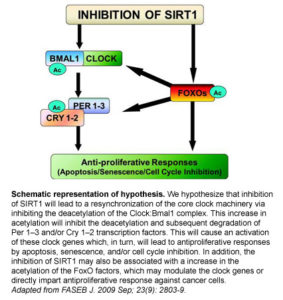 Based on our studies above and available literature, in a recent publication (FASEB J, 23: 2803-2809, 2009), we proposed a hypothesis that SIRT1 inhibition will impart an anti-proliferative response in age-related cancers via resynchronization of deregulated core clock circuitry (circadian rhythm) at the cellular level (see figure).

The mammalian circadian rhythm is controlled by a number of metabolic and physiological core components and the expression of clock genes is a characteristic feature of the central rhythm generator and peripheral oscillators. It is composed of a central pacemaker in the suprachiasmatic nucleus (SCN) of the brain which acts to synchronize clock component genes such as Clock, Bmal1, Periods (Pers), and Cryptochromes (Crys).

Chemoprevention of Cancer by Resveratrol

Over the last decade, in vitro and in vivo research from my laboratory has shown that resveratrol, a phytoalexin antioxidant, imparts both:

An important issue with the future development of resveratrol for disease management is believed to be its low bioavailability due to its rapid metabolism in mammals. Because of the proven efficacy of resveratrol in pre-clinical settings, it is necessary that concerted multidisciplinary efforts are made to enhance its bioavailability in humans.

In this direction, we are currently investigating a unique approach of enhancing the bioavailability of resveratrol by inhibiting its metabolism by combining it with piperine, an alkaloid derived from black pepper (Piper spp.). It is known that during metabolism, the majority of resveratrol undergoes glucuronidation and sulfation. Studies have also shown that piperine inhibits glucuronidation in vivo.

(For research-related inquiries only. Patients and others with medical questions should call 608-287-2620)